The POC Fund would like to acknowledge the tremendous and continued support received from the Professional Footballers Association (PFA) in our efforts to honour the name of Patrick O’Connell. Gordon Taylor OBE (CEO), Colin Hill (Commercial Director) and former Manchester United Captain, Martin Buchan have all shown a great interest in our campaign. Last year Michael & Sue O’Connell, relatives of Patrick, were invited to PFA headquarters for a meeting to discuss the project. Martin Buchan also attended the plaque unveiling ceremony in Dublin in June 2015. 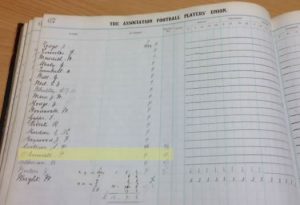 Like Patrick O’Connell, Martin Buchan is a former Manchester United player (456 games) and shares the honour of being a Man Utd Captain. He played in two World Cups for Scotland and was also an FA Cup winner in both Scotland and England. He actually helped the POC Fund locate Patrick’s original PFA membership record (see the fascinating photo, right) and just recently Martin, along with Artist Tony Denton and our POC Fund Rep. Alan McLean, met up with Mark Wylie, the Curator of the Manchester United Museum to discuss honouring Patrick at the club. It’s yet another great recognition of his life by a world famous team. We will keep everyone informed of developments! 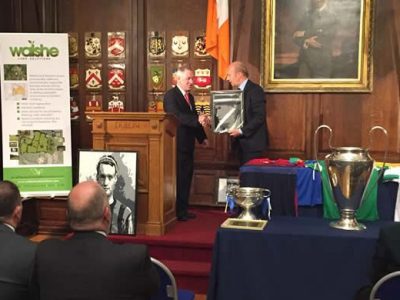